Ork Crafted Items. They will work for a human. Well, up to a point.

The reject Ork rescued from the Dark Eldar in the Grace system appears to have imprinted on Explorator Felicis and is currently in the scrap areas of the In Purgatio Lumen where hs is periodically given assignments and requests by the crew to build them things. So far to everyone’s knowledge, nothing has gone wrong with this brilliant idea.

Arch-Militant Caine has asked for some Mega Armour of his own from the Mekboy. In unrelated news, the crew have reported bulkheads disappearing around Orkifex’s section.

Remarkably the first thing he produced was a human-usable Orkish Power Klaw, which although it will require amputation to use properly appears to be something that could almost be constructed by an Adeptus Mechanicus initiate who is about to be drummed out. An almost unparalled level of Orkish quality.

Astropath Eckhart’s new familiar, although adorably fierce, is not very well protected. As a result, the Mekboy crafted a set of Orky power armour to protect the little guy when he was adorably charging around and tearing off ankles. Unfortunately, he appears to have welded a different Void Rhino into the suit. Eckhart now carries around two void rhinos. 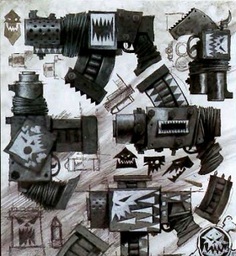