Acolyte of the Inquisition. Takes no gruff, and will not back down

An Arbites officer who was drawn into the Inquisition following the exposure of chaos corruption within his precinct. Although he was instrumental in exposing and executing his fellow traitors, his service record was forever tainted and he was considered a scapegoat in allowing the heresy to perpetrate as far as it did. His competence and valour was not ignored by the Inquisition however, and the skillful young Marshal was recruited into the Ordo Calixis.

His investigations into a tech-heresy on an Agri-World caused him to be swept up in the return of Erasmus Haarlock, and he joined the existing band of acolytes who were hunting the legendary, twisted Rogue Trader. The last official contact is when Varn and his acolytes left for the ice world of Mara, where he was listed as missing in action.

He has since re-appeared along with his fellow acolyte Nixios Nullvoid as they were investigating Aurora Neena and the illegal trading of an unknown xenos race. 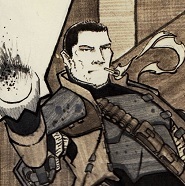