Acolyte of the Inquisition. A Scholar and a Heretic

An intimidating brute of a man, Nixios always compensated for his unusual size and musculature through timidity and an inclination to shy away from attention. Sadly for him when an Inquisitor is looking for an Adept to investigate ruinous cult activities he will probably pick the one who is least likely to die the first time they’re shot by a ganger’s stub revolver. When his genealogy was more closely examined and the truth of his mutation discovered, Nixios was either given a choice to serve the Inquisition in all things in the hope that he could redeem whatever sin tainted his soul, or face immediate execution. He chose the former.

Joining the retinue of the Ordos Calixis, he had a respectful if not eventful career that was shaken to its core by the return of Erasmus Haarlock and the tumultuous upheaval of the Calixis Sector that followed. Exposed to a Warp explosion, he began to demonstrate worrying traces of Psyker powers that bordered on sorcery, but before any conclusion could be reached he and his fellow Acolytes vanished on Mara, and have not been officially listed as missing in action.

He has since re-appeared along with his fellow acolyte Varn Einholtz as they were investigating Aurora Neena and the illegal trading of an unknown xenos race. 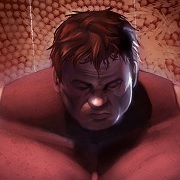