Composed Acolyte of the Inquisition. She's gorgeous and lethal

A confident and striking young woman, who serves the Inquisition currently based out of Footfall. Preferring the company of servitors and servo-skulls, she dresses for concealment and stealth, in order to maximize the augmetic disguises that she wears while on mission. The only clue to her past is her high-quality augmetic arm, which she alluded to having lost in the circumstances that led her to join the Inquisition.

She was Zacharya Caine’s point of contact during their operation to take down Hestia Dux of The Beast House. Following their mission she informed the Arch-Militant that the xenos they were investigating appear to have originated at Melbethe, and that the Inquisition would reward the crew handsomely if they could retrieve several live samples. 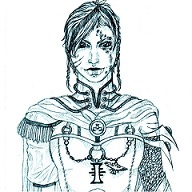