Powerful trader from an ancient and wealthy line. Values honour.

Lady Sun Lee is the current Rogue Trader of the Ma’Kao Dynasty, a line that boasts impressive holdings throughout the entire Segmentum Obscurus. Her family’s name is well-known to all Rogue Traders operating in the sector, and even the least members of her line tend to be wealthier than the average Rogue Trader. The bulk of her family’s fortunes lie in their extensive holdings in Agri-Worlds, servicing their line’s production of Hive Worlds that feed a steady stream of materials and workers to the Forge Worlds, producing weapons that are then sold to House Ma’Kao’s extensive contacts throughout the Imperial Navy.

Despite all of this wealth and privilege, the title of Rogue Trader of this line has always preferred to lead by example, believing that resting on their nigh-unimaginable resources will be the first step towards their decline. Lady Sun Lee has come to the Expanse with only her vessel – the Nihontu – and a small retinue of her personal retainers in order to expand her dynasty’s influence yet further. A woman of honour and principle, she leads her endeavours from the front as a matter of pride, and has always begun to carve her own legends into the Koronus Expanse.

She attended the Sanguinala Celebration at Footfall, and during a meeting with Jequin Hos relayed a story of how she convinced the heathen empire of Phoros that she was their Goddess returned, at which point she robbed most of the empire of its precious jewels. Intending the Imperial Faith to then use this as leverage to bring the world in line, she agreed to share the history of the planet with Jequin Hos in exchange for being allowed to visit Svard and learn of its history. 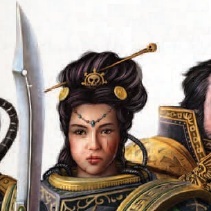