Ancient Lineage Now Embodied In This Man. How Unfortunate.

A complete monster in combat, he prefers violence to negotiation, which makes it even more unfortunate that he’s skilled in both. Able to go from incredibly charming to ravingly bloodthirsty in an instant, those who stay on his good side will testify to his loyalty and strong, decisive leadership. Until recently, those who do not could testify to his brutal cunning in war and the strength of his fleet, but usually they don’t put any of that in their vessel’s last, frantic salvation beacon.

The Winterscale family has been in the Koronus Expanse since shortly after the path through the Maw was first charted. Sebastian Winterscale, first of the dynasty, entered with a single Cruiser and a gut full of cunning. Defeating smaller enemies, he incorporated them into his Dynasty rather than destroying them and used them to fuel his rapidly expanding empire. His family’s reach has only expanded in the time since then, and there is a region of space in the Expanse named Winterscale’s Realm.

The history of Calligos Winterscale is unknown. When the previous Warrant holder, Arturous Winterscale, died there was none to step forward to claim his warrant for a number of years. Calligos’s emergence has been the subject of many rumours, but he has done little to enlighten them with the truth. He surrounds himself with legends: the defeat of Kaptain DaBurna, the destruction of the Eldar vessel Silence of Eternity and his journey to Hecaton’s Rift are all steeped in rumour.

Following the conclusion of The Winterscale War, and his victory over Aspyce Chorda he has emerged as the dominant force in Winterscale’s Realm, and possibly the entire Koronus Expanse. He later declared war on the Hos Dynasty following the perceived assassination of Hadarak Fel by the Dynasty.

Persuaded into attending ceasefire talks by Lord-Admiral Bastille VII, Winterscale was implacable in avenging the death of Fel, the destruction of Maleziel, and the relentless slandering of his name by the Dynasty. Counterclaims against him were ignored or accepted, but nothing caused him to back down. Not until proof was presented that Hadarak Fel may have faked his death in order to force the two Dynasties into war.

Seeking a period of consultation, he was not seen following the assault on the Versailles. Evidence suggested he had vanished in a flash of light, indicating some sort of warp transportation. While this could have been an assassination attempt by the Eldar, the current assumption was that he was kidnapped by forces of the Fel Dynasty and held aboard the Fallen Hand. His rescue is now paramount, as his death would greatly destabilize the Koronus Expanse, as well as likely spell the doom of Svard in a retributive strike.

The Hos Dynasty managed to convince him that Hadarak Fel was not assassinated as believed, but instead behind the war.However this knowledge did not save him, and he was captured by the Fel Dynasty, and his body usurped by the mind of Fel via the heretical technology of the Logicians.

Though technically alive, his body is now completely under another’s control. For the merged entity, refer to Calligos Winterfel. 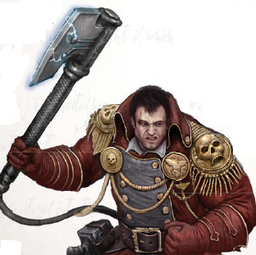