Dashing Swashbuckler, at least inside his own mind. Boistrous and Daring.

Rogue Trader of House Arcadius, he does not hold the Warrant of Trade for his dynasty, but is imbued with their authority to expand into the Koronus Expanse. His family is predominately active in the Eastern Rim of the Imperium, but according to Gerrit such a life was boring and filled with negotiations and bargaining which he seems to have little patience for.

Bearing a number of light scars on his face and arms, he is an accomplished duelist and seems addicted to the thrill of adventure. Seeking out the Koronus Expanse, he seems to care little for any profit or mercantile ventures, but thrusts himself into the Expanse with the air of one who will find joy in whatever awaits him, be it good fortune or ill. 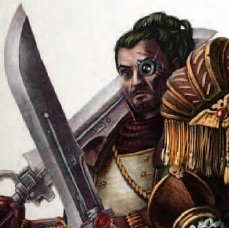