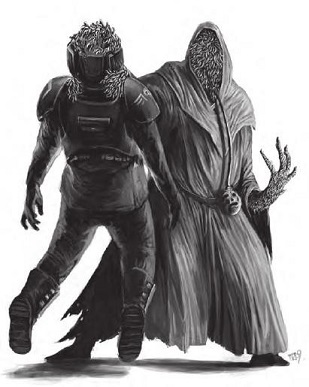 A mysterious race of Xenos that until recently was thought to be just a rumour. Their “true” form appears to be a lump of maggots that coalesces into a vaguely humanoid form. Their true terror comes from their abilitiy to devour a person’s brain, and absorb all their memories. Their extreme malleability also gives them the ability to wear the skin of another human being as a suit, and masquerade among humans indistinguishable from another.

The Slaugth are apparently a race of psychic blanks, meaning they prefer to keep the company of their vat-grown constructs who would not be repulsed by their negative personality. Their technology is highly advanced, at least on par with the Eldar. Fortunately for the Imperium their numbers appear small, and you are likely to only encounter a handful at any one of their incursions. Unfortunately they are amazingly resilient and ruthless, and even facing down one would be a challenge for most groups of soldiers.