When the Jokaero was first encountered aboard the Promise of Agony, the potential for this strange techno-savvy Xenos race was quickly identified by both Artifex Felicis and Lord-Captain Jequin Hos. Unfortunately owing to the Jokaero’s species not possessing any known linguistic capabilities, the Captain had a datapad loaded with a simple application that would verbalize any phrases that was entered into it. The Jokaero accepted such a gift and quickly ran off, returning a few days later with a large amber button set into the bottom, and three glowing runes along the side.

Initially fearful that it might explode, the Captain and Explorator set the device aside for awhile. After the Jokaero’s modification of the Gellar Field to integrate with the Void Shields, Astropath Eckhart believed that the creature was probably not trying to kill them, and returned to investigate the device. He found that if he held down the button while someone spoke, the translation device would “learn” their voice patterns, and any speech would then perfectly imitate that voice. It still required a decent sample of language to work properly, but the potentials for such a device were intriguing, especially with the Xenos Clone Field enabling a wearer to look like an Ork. 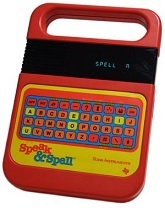