A common prayer book that was penned by Saint Drusus. A Priceless relic

The Book of Imperial Graces itself is a common affair, a prayer book available in churches across the Imperium bearing many of the standard invocations and gratitudes towards the Emperor. However, it is not uncommon that at the end of Crusades or other events of note in the Imperium that an especially pious or famous participants will pen their own version of the Imperial Graces.

These books are indistinguishable content-wise from their brethren apart from being hand-written, except for the first page in the book which is invariably a reflection or words of wisdom written by the author for posterity. Certain examples have been known to be exchanged for great mansions or even void ships among the truly famous.

The Hos Dynasty has come into possession of one such book deep in the hold of the Emperor’s Bounty that was penned by Saint Drusus at the end of the Angevin Crusade. Currently held aboard the In Purgatio Lumen, its presence is slowly being circulated among members of the Ecclesiarchy, who speak of its worth in hushed tones.

Foreword of the Book of Imperial Graces (Translated from High Gothic)

I stand upon this world of Scintilla, the new capital of the latest Sector to join the Imperial Fold, and as I look back on all that was accomplished in the last few decades, I find that there are five lessons that can be drawn from the Crusade of Golgenna Angevin.

The first is the strength of mankind’s vision. We live in a galaxy that many view as cold and hostile, beset by enemies from without and within. Every day a new apocalyptic struggle is birthed in flames on one of the millions of worlds in the Imperium, and it would be folly to believe that we always triumph in fighting back the darkness. Our worlds are separated by a gap uncrossable except by venturing through a reality so warped and twisted that it would flay our very souls to gaze upon. Nonetheless, whatever may now be said about Golgenna Angevin, he looked at this galaxy and he was not satisfied with those in Ixaniad believing themselves above the light of the Emperor, those in Scarus believing that His wrath would never reach them for their transgressions, and those in Calixis believing themselves lost to His light. Through the vision of this one man, great armies were assembled, any fraction of which would be enough to bring an entire system to compliance and it was unleashed upon this arm of the galaxy to restore Imperial rule. All of this stemming from one man’s dream.

The second is the folly of mankind’s hubris. The re-conquest of the heathens of Ixaniad went as well as could be dreamed, and the Remembrancers and stories that came from this crusade will serve as inspiration for as long as the Imperium stands. It was this complete and overwhelming victory that was our near undoing in this endeavor. We saw the Scarus Sector as pliable, and no challenge to the mighty conquerors of Ixaniad. In these days even I was not immune to such a belief, and the mighty Imperial Crusade split its forces and attempted to seize individual glory. In hindsight, I do not believe the heretics in Scarus were any stronger than the ones we had already conquered, but we had lost the unity and the strength of purpose in our actions, and we were on the verge of being overwhelmed. It was at the moment of my death that the Emperor himself revealed to me the weakness in our actions, and I knew that the Crusade was on the knife of failure

The third is the indomitable nature of mankind’s spirit. When I arose from the assassin’s blade and struck him down, I had been filled with His glorious light and renewed purpose for our crusade. Yet ultimately it would have all been for naught if not for the ability of the forces I had allied with to rally to me. The superhuman warriors of the Adeptus Astartes. The sacred Tech-Priests of the Adeptus Mechanicum, the incorruptibly faithful of the Adepta Sororitas. The fearless guides of the Navis Nobilite. The ceaseless vigil of the Inquisitorial Ordos. The unyielding faith of the Adeptus Astra Telepathica. The constant officers of the Imperial Navy. The fearless soldiers of the Imperial Guard. The ceaseless support of the Departmento Munitorum. Each of these forces showed their strength and capability, and together we took what had become a fractured collapse of a fleet and turned it once more into a symbol of Imperial unity, with the force to crush those who stood in our way.

The fourth is the righteousness of mankind’s cause. The Calixis Expanse was a blighted wasteland, home to Xenos and Heathen empires that had believed themselves the rightful owners of the stars. By this point our own forces were weakened and scattered, and by raw power it is possible we could have been overwhelmed and vanquished. Yet we did not fall, nor waiver in our resolve to bring this region of space into the light of the Imperium. Those humans scattered since the Dark Age who did not convert have fallen into darkness. The Xenos races that claimed these stars have been exterminated without trace, or driven back to the Halo to await their slow death. Even now great hives and shrines are being erected on worlds all across the newborn Sector, and the Imperial Truth will shine here forevermore.

The fifth is the importance of mankind’s vigil. Though we have claimed these three Sectors in the names of the High Lords and Him on Terra, our quest is not yet complete. Already the Koronus Expanse beckons with the bedraggled survivors of our purges here. The Witch-Lords and Warp Worshiping Xenos cower there, fearful of the wrath of the Emperor as well they should. I sense that my role in this conquest is done, that He has a plan for me that shall cause me to stay in these newborn territories and lend my wisdom and His voice to their actions. Nonetheless, already word spreads of a new crusade, to spread the domination of mankind out to the Halo itself. I know not when we shall set out across the boundaries of the Calixis Sector to bring yet another region into the fold, but until that day comes I and all who carry the faith shall be watchful for any who would try to steal the victory of Mankind from us.

We are an empire of a million worlds, our cultures are diverse and innumerable, but from the coldest Ice World, to the least hospitable Death World, to the most fire-blasted Desert World, we worship the Emperor with our words and deeds. We fight and die for the Imperium of Man. Let us tell the Alien, the Witch, the Heretic that we shall not rest until all of them are wiped off the face of the galaxy. Our deeds are the song of the Emperor’s light, and our actions carved in their blood. Glory to the Emperor, and may the Imperium of Mankind never fall. 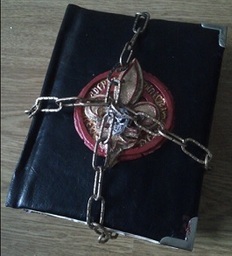