A tiny creature that is quite surprisingly tough and resiliant

A tiny creature purchased from Titus Eisen to serve as a Psychic Familiar for Astropath Eckhart. The miniature Xenos fits in the palm of his hand, and has bonded to the point of being able to psychically sustain its master. Despite the creature’s incredibly small size it is potently aggressive, easily capable of shattering an unaware man’s shins on a successful charge.

In order to complete the psychic bonding Eckhart had to purchase the creature shortly after it had given birth. The excess rhinos were released into the In Purgatio Lumen where he’s pretty sure they’ll die off inside the vents.

Astropath Eckhart’s Void Rhino is also a familiar to him, and with it he has enhanced his already prodigious Psychic talent. It possesses the following abilities 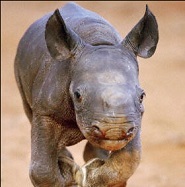