An Enforcer who is a liaison to the Arbites on Svard

The leader of the local Enforcers for the Svard system, she was stationed as an observer in the Adeptus Arbites precinct of Exclusion when the raid on the system began. When the Imperial Envoy ordered all Imperial personnel to withdraw and abandon the prisoners currently on Exclusion, she disagreed with the decision, inadvertently creating the situation that led to the prisoners overthrowing the Arbites staff.

She advised Arch-Militant Caine on the political situation when he arrived to determine what had happened to the planet. She was prepared to forge the report on the death of the Arbites Senioris, and was impressed with the Arch-Militant refused to ignore the truth of the matter. Once the situation was resolved, she returned to Svard Prime to aide in restoring order. 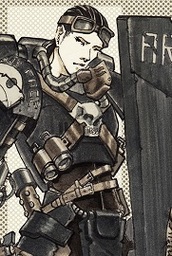