Svardic Nobleman who faced execution and won a close reprieve

A child of a minor noble house on Svard Prime, the weak-willed and easily frightened Vartan was sent to Exclusion in the hope that he would grow from the discipline and intimidation of the Adeptus Arbites stationed there. Unfortunately for his family, they sent him just before the riots and unknown attackers came to the Svard System, and Vartan was stranded there along with the rest of the prisoners.

During the riots he attempted to appeal for calm, and did manage to get most of the local personnel to surrender as well as many of the Arbites. Unfortunately the Senioris refused to yield, and was killed in the ensuing battle. The investigation of Arch-Militant Caine and Verispex Klabund revealed that Andreev was partially responsible for one of the fatal blows on the Senioris, but that investigation revealed he had fired out of reflex, and without aiming or intention. Unwilling to condem him to die, the pair faked the report to Arbites Minucci, and the youth was released along with the remainder of the children to go back to Svard. 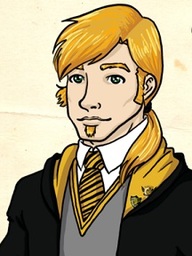