A captain formerly belonging to the fleet of “Admiral” Silbannacus Jacobus. During the failed ambush of the In Purgatio Lumen her vessel was badly damaged by a lance strike from the In Obscurum Veritas. Crippled but still functional, she attempted to limp away from battle to recover her strength in the Inti system.

When the Hos Dynasty seized the former assets of the dead Pirate band and began scouting the system, she realised that there would be no way for her vessel to escape, and following the mercy granted to Augustus Herst, she surrendered her vessel – renamed the Wise Capitulation, she and her vessel were escorted back to Svard for repairs.

Captain Vallie Brensel is a cold and proud woman. Although she endangered her crew and her life she eventually agreed to surrender in exchange for amnesty. Her ability to see sense in a hopeless situation is to be commended. Clearly she tries to do what is best for the crew and herself. It is recommend to have some people on board her ship watch her though for any musings of rebellion against the Hos Dynasty. 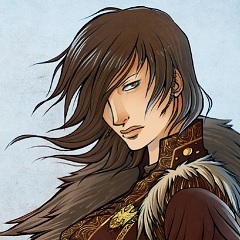