The Homunculus overseeing work on Grace. Not great in the void.

The warped mind who orchestrated the capture and interrogation of humans in the Grace system. After the deaths of Findecano Calefas and Tinuviel he attempted to seize control of the remaining members of his Kabal and escape aboard the Promise of Agony.

Whatever genius he may have had did not extend to Void combat tactics however, as he was dispatched by the combined efforts of the In Purgatio Lumen and Da Ship Eata. 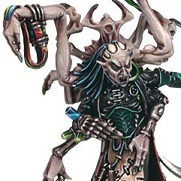