A Yu'Vath creature that was buried inside Svard, and controlling minds

The original purpose that drew the Yu’Vath to the Svard system has been lost to the ages, but whyever they came here, they did not leave the system untouched. Buried deep in the heart of the system lay a massive void construct termed The Whisperer, that possessed some rudimentary and blasphemous intelligence that affected the system as a whole. It possessed innocent civilian’s minds, and warped their will to serve its own purpose.

Ultimately, it succeeded in its goal in drawing a warp-capable ship to the system, capturing it, and using a controlled warp breach to release it from its confinement. It then proceeded to battle both the Hand of Redemption and the In Purgatio Lumen, where it unleashed its ferocious power on the two Imperial warships. Despite a ferocious barrage, it was narrowly defeated, and appears to have been completely destroyed. 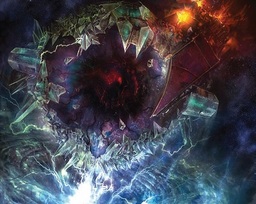