When investigating the riot on Cog, Explorator Artifex Felicis was nearly felled in a single blow by an attack from the creatures later identified as a Crystalwisp. With the fireteam of Death Bastards led by Valencia Mercutio caught off-guard by this strange Xenos threat, the Sergeant managed to pull the Explorator to safety, while the eight troopers overcame their fear long enough to provide covering fire for the escape. Though Mercutio and Felicis made it to safety, the eight troopers who remained were cut down. The only other survivor of the unit was Trooper Martinez Tegzas, who fled when the creatures first arrived.

The Cog Eight were later given a state funeral on Svard Prime in honour of their sacrifice.

Rollcall of the Fallen 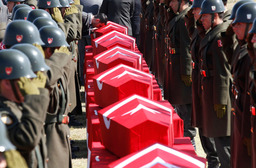