The Liege of Footfall. So fat he could hide Ogryns inside of those folds.

The position of Liege of Footfall is acquired through the simplest method: Whomever kills the previous Liege becomes the new one. This has led to an interesting political situation where the ones with the true power tend to be advisors to the Liege, and the Liege himself is no more than a figurehead whom people pay lip service to without actually showing him any respect or honour.

No one has exemplified this concept better than Tanthus Moross! Having been in power for an almost unequaled 8 years, most of the day-to-day business of Footfall is handled by his senior advisor Vladaym Tocara. He has taken the opportunity to grow rich and rather impressively fat in his role as Liege, and has reached the point where he’s now almost a vehicle in human form. The only thing he’s known to spend his fortune on is his collection of stunningly beautiful, mind-wiped concubines purchased from The Tutors, and a series of increasingly elaborate augmetics to support a digestive system that has probably tried to commit suicide on a number of occassions.

The obese ruler has contacted Astropath Eckhart for assistance in removing Vladaym Tocara from Footfall in an attempt to ease the control over the Cold Trade. He was also a key figure in sorting the Sanguinala celebration inside of Footfall, primarily to snub the Battlefleet Koronus. 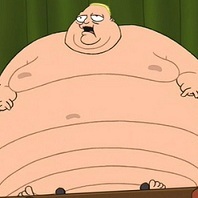