A Tech Priest who has mastered theoretical Gellar Field use

When Explorator Artifex Felicis and Head Tech-Priest Tayber were busy repairing the Svard Defense Force Frigates, someone had to stay in command of the Engineerium of the In Purgatio Lumen. That someone was Syros Yurth, the most junior of the senior Tech-Priests, who expected an easy time while his superiors were away. Unfortunately he had not reckoned on the Jokaero on board playing havoc with the Gellar Field, and both Lord-Captain Jequin Hos and First Officer-Astropath Eckhart required it being tracked down.

Although the Xenos upgrades to the ship were unknown, Yurth appeared to have specialised in Gellar Field management, as he correctly deduced that the Gellar Field had become integrated with the Void Shields, and had even managed to track down a probable area for the Xenos creature. Having tracked him down along with the Captain and the Astropath, he was outraged to be confronted with the Xenos having tampered with sacred Xenos technology, and then even angrier to discover that neither officer had any plan to correct this affront to the Omnissiah! Though he begrudgingly bowed to the Captain’s authority, he swore to bring this up with Explorator Felicis, confident that he would not stand for Xenos corruption on the ship.

Finally managing to discuss his concerns with the senior Explorator, Yurth was horrified to learn that Felicis not only allowed such apparent blasphemies to the vessel, but actively encouraged them. Fleeing the Engineerium, he swore that he would bring these tech-heresies to light, but was pursued by the Explorator. Though initially he managed to shake off his pursuer, he was ultimately and definitively felled by a plasma bolt to the back, killing him instantly. Explorator Felicis then successfully convinced all the onlookers that he had gone mad, and Yurth’s fears appear to have died with him. 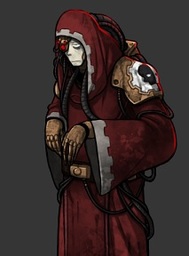