Race of blind Xenos that were harvested for drugs. Vile and dangerous

This mysterious race of Xenos were the focus of a mysterious drug running operation between Jordan Roth and the nobleman Castus Klein. Investigation and Interrogation by Arch-Militant Zacharya Caine revealed these creatures were in fact being harvested and somehow transformed into a narcotic that was being shipped to the Koronus Expanse.

Once freed from their cages, they were revealed to be blind, but possessed keen hearing sufficient to locate and devour their former jailor, and their toxic bite nearly brought down the Arch-Militant before he managed to dispatch them. 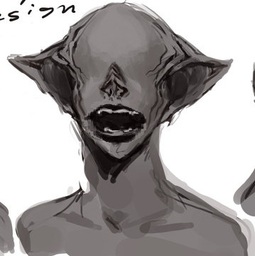