Former Successor to the Hos Dynasty Line. Now Without Purpose

Groomed from his birth to be the next Hos Dynasty’s Rogue Trader, he was expecting a reasonably comfortable life of power and prestige once his father passed away. Instead, he found himself facing down claimants from two of his sisters, Carnelia Hos and Petria Hos. Utterly narcissistic, he did not seriously expect to be challenged for what he saw as his birthright and was forced on the defensive for possibly the first time in his life.

In the eyes of the Dynasty he represented the lineage and continuity of the Hos Dynasty, and it is entirely possible that had things continued the way they were he would have ended up in possession of the Writ of Authority. Unfortunately for him, the succession was decided with Jequin Hos’ Gamble and his comfortable future was snatched away from him.

Left without purpose or direction, he has had to consider for the first tmie what he is going to do, and whether or not he was ever worthy to think of himself as the heir to Jarrion Hos’ legacy. 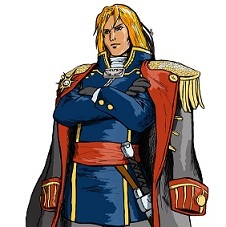