Svard Councillor who is more concerned with merchants than ore production

Councillor Rhea’s position on the Crystal Council has as much to do with her expertise dealing with both the Imperium of Mankind and the Rogue Traders that come through the system as it does her own personal charm. A member of the ascended merchant class following rediscovery of the Imperium, she maintains a number of lucrative contracts with other systems in the Koronus Expanse, and some even stretch even to the Calixis Sector itself. Although Svard’s exportable output is normally small, her ability to ration what it produces and sell it to the remaining sectors has brought considerable wealth into the system.

She asked Lord-Captain Jequin Hos to look into the restoration of Kybu, as that was the primary source of a lot of the exotic compounds exported to the rest of the Imperium. 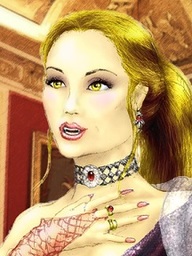