When the Hos Dynasty agreed to tne offer made by Dante Balthazar to head to the Grace system and locate The Widening Gyre, they were offered a contingent of Iron Hounds mercenaries to aid in securing the ship and also as oversight for the salvage operation. Despite this being optional, Lord-Captain Jequin Hos eventually accepted this proposal, and received a platoon of troops nominally under his command, but in fact under the command of Severian Tollak.

Tollak is a veteran with the Iron Hounds, having served with them since he was first press-ganged at a young age. Having travelled across the Calixis sector and beyond on missions, he is deeply cynical and suspicious. Nevertheless he obeys orders and follows his contract to the letter, though probably no further. He was instrumental in repelling boarding actions by the Dark Eldar and the Promise of Agony.

At first my impression was that Severian Tollak was a stooge sent by the Hounds to simply watch us and report back to his master on us. However after watching him engage not only Orks, but a warp demon on the Widening Gyre I believe him to be a trustworthy associate. He was able to retain his calm against the demon. Also he was not to happy to encounter the demon and it may be valuable contact within the Iron Hounds organization. It is also possible that we may turn him onto our side. Especially considering he was more then willing to tell us what other cargo there was to ensure its ‘non-demonicness.’ As well I should mention he seems to be a better tactition then our First Officer, and can hold his own in a fight. 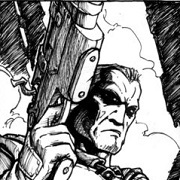