Confused Medicae who must be reminded to always Scan Harder!

The Medicae officer aboard the In Purgatio Lumen when Explorator Felicis’s expertise is not required. Although he is more than capable of handling the every day injuries that occur when running a void ship, he is out of his depth when diagnosing the odder ailments that befall the crew of the Lumen.

When investigating the Svard System, he was ordered to scan the brain of Mathieu Riek to determine how the Warder fell to the mysterious power assaulting the system. Initially he found nothing, but at the repeated urging of Astropath Eckhart to scan harder, as well as the off-site consultation by Explorator Felicis, a small abraison was eventually detected, although not by him. 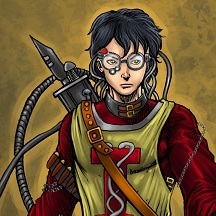