The general of Damaris who has his plans for post-invasion

The Commander of the planetary defense forces on Damaris, he was born into a powerful noble family and was sent to serve in the Levy as part of his education. Far from the usual relaxing soujourn favoured ny most noblemen, Dante used his ambition and desire to prove himself to rise through the ranks of the defense forces to his current position of General. In his youth he longed to be taken as part of the Imperial Guard tithe, but his family’s connections prevented that from happening.

A well-respected leader among the people of Damaris, he views the current Governor as weak and unsuited for leadership in a time of war, and has been using his influence to gradually gain more power during the invasion.

General Remi Dante is the head of Damaris PDF. Unfortunately Lord Hos made an unfavorable impression on the General. He is not well disposed to anything Lord Hos does. It should be noted that part of this reason is due to the number of faux paus Lord Hos made while interacting with him. Lord Hos’ voidsman charm did not work and backfired in this instance.

It appears that General Remi Dante had designs on the government of Damaris. However although he had the backing of his own PDF and it seems Rouge Trader Blitz, he did not realize that he would have to deal with Captain Hos. He imperiously asked for support from Hos for his coup, rambling on about the destruction the previous governor had wrought on this planet (neglecting that the orks did this damage). He informed Lord Hos that he wanted his support for his coup to dispose of Governor Kapak. However the quick thinking Hos instead used his power Astropath/First Officer to cause Dante to hand power over to Lord Hos (as an interim measure). Its is now that Dante then was forced by the astropath to come quietly into Lord Hos brigs. How his treachery shall be doubt with is to be decided by the War Council of Damaris. 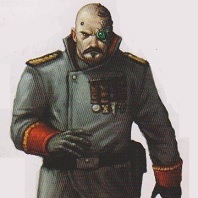