Svardic Malcontent who started a riot and was executed

A troublemaker and roustabout from Svard Prime who never quite broke the law enough for more serious punishment, he was sent to Exclusion in the hopes that he could at least learn enough of a trade to be pressed into service with the Svardic Mining Guilds. When the Svard System began to fall prey to an unknown force, the Adeptus Arbites acting on behest of the Imperial Envoy attempted to pull out of the system, and leave the native Svard citizenry to fend for themselves. Raoul was one of the principal instigators of the riots and managed to lead the prisoners in a rebellion that caught the remaining Arbites and Enforcers off-guard and placed them all in the cells apart from the Arbites Senioris, who was killed in the skirmish.

When Arch-Militant Caine landed to investigate the planet, Raoul realised that at the moment the whole prison faced death, and attempted to force his way aboard Caine’s Frigate. Unfortunately, his righteous fury was no match for Caine’s martial prowess and extensive bionics. Burned by a plasma rifle, he was sent to the infirmary. When he was labelled as one of the ones responsible for the death of the Senioris, he was personally executed by Olympia Minucci. 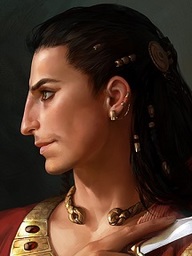