Administrator of Bannack, and the woman who keeps it running.

The planetary administrator of Bannack, she was in charge during the Hos Dynasty inspection and subsequent invasion by the forces of Chaos. She worked as a centralized command while the Dynasty purged the installation, but ultimately it was impossible to keep it intact.

She remained behind in the spire to trap as many of the Chaos creations as possible, and lock the horrors down. She was killed in the lance strike by the In Purgatio Lumen 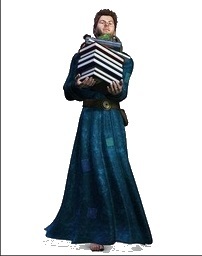