The discoverer of the Maw, and through it the Koronus Expanse

Though Navigators and Scholars had long speculated that there must be a stable route into the Koronus Expanse, centuries of exploration had failed to locate anything approaching a stable route and explorers were lucky if they returned with just a heavily damaged ship in the warp storms. However, at the close of M40, through blind faith and relentless determination, Rogue Trader Purity Lathimon was able to discover the Maw, what would become the Stations of Passage, and with it the first chartable route into the Koronus Expanse.

It is unknown what threats she faced on the other end of the Warp passage, but when she returned she quickly spread word of her accomplishment, rallied a huge fleet and set off in the first organised effort to establish an Imperial (or at least a Rogue Trader) presence inside of the Expanse. The successful expedition as well as the holds filled to the brim with lost archeotech and xenos treasures began mass rush into the Expanse to claim its wealth, which continues to this day.

The final fate of Purity Lathimon is lost to history, with some saying that she continued her crusade to her own destruction, and others believing that she purchased an entire star system and spent the rest of her days in a luxury undreamt of. Her name is still revered, and lost void ships have often prayed to her for guidance when lost. 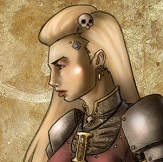