Unconquerable. Forges her own destiny where hope had looked lost.

Fourth in line for the Hos Dynasty succession, she had constantly been overlooked by her elder siblings as possessing no intelligence nor ability except what they would give her. When approached by Carnelia Hos to support her in her quest to claim the Hos Warrant, Petria decided instead to take her own path. Contacting the mining guilds closest to her home, she systematically began supporting candidates for leadership who in turn pledged their support to her. She also sought the support of Faydra Hos, who had denied claimancy to the Warrant but ad not at that time pledged any support. Even with these resources, she had no chance of securing the Warrant, but knowing that Carnelia would challenge Siegmund Hos, she hoped to secure enough support to win it in a three-way challenge.

Unfortunately when the succession crisis started, Carnelia and Siegmund both proceeded to erode the support she had won, and she felt her hopes slipping away. When Jequin Hos issued his challenge to the dynasty, she reluctantly added her support to his, spiting the two Hos siblings who had not considered her a serious threat before.

Despite her support for her brother, along with Carnelia she denied Jequin Hos the resources of the Dynasty that she herself has secured, saying that if her brother could outmaneuver the three of them then he should be able to succeed on his own. 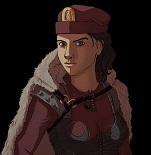