Mekboy Prodigy serving under the eye of the Mechanicus

As part of Findecano Calefas’s plan to keep the Orks of Grace under control he had the smallest and weakest recruited into his service to maintain his illusion as Warboss Toofgutz.

When the deception was revealed by the Hos Dynasty, most of the Orks on the station were killed. However one small, scrawny Ork survived the initial massacre, and though badly hurt was saved due to the intervention of Artifex Felicis handily dispatching the Wych through a combination of Mechanicus mechandrites and a powerful piece of Archeotech.

Taken under the thrall of the Priest of Mars’ incredibly battle prowess and technology, he renamed himself “Orkifex” in honour of his saviour, and has since followed the Explorator around as his new personal assistant and Mekboy.

In order to prevent talk amongst the crew, Orkifex has been installed in one of the rarely-visited sections of the ship, and given a pile of scrap-metal with which to craft various items at the request of the crew. 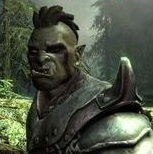