The Imperial Envoy who is lost in Svard. What was his mission?

A representative of Battlefleet Koronus, he was in system when the Svard Promethium Refineries fell to what at the time was believed to be a riot. As the situation worsened, he disappeared from Svard Prime in his Imperial frigate to “investigate” the situation, and has not been seen since.

Arch-Militant Caine learned that the next confirmed sighting of him was on Exclusion, where he ordered all Arbites and Imperial personnel to withdraw from Svard until the colony agreed to join the Imperium. He then departed for Silence, but when the In Purgatio Lumen arrived in orbit neither he nor his frigate was anywhere to be found.

He was finally discovered aboard the Svard Promethium Refineries where he battled Astropath Eckhart, Arch-Militant Caine and Explorator Felicis. He had succumbed to corruption at the hands of the Yu’Vath, and unleashed fearsome psychic powers on the party. Eckhart was successful in slaying the corrupted envoy, but in the process triggered a psychic beacon that lured The Whisperer to the area. 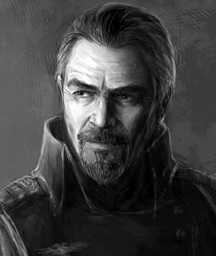