Navigator Primus of In Purgatio Lumen and part time Reliquarist

So this is a person who is somewhat used to living an orderly life (with brief periods of chaotic disruption). His early life involved working at a school in the Scarus Sector, inpreperation for his eventual employment with the Hos Dynasty (his education and posting being made during a compact with the Hos Dyansty). It was hear that he meet a young Lord Hos. The two hung around in same circle of friend. He was able to do well in school and was consider very bright. Having good grounding in mathematical and cartographic idea, in addition to his interest in Imperial Theology.

His Navigator training began with tutoring and training with his House Pazzano with the Battlefleet Calixis. His house has long been a source of Navigators for the local Battlefleet. Under his tutor, Gaspare of House Pazzano, he was noted as a somewhat bright and clever child, if sometimes one who was haughty and got to much enjoyment from the finer things in life (due to his position as a member of a Navigator House). Through his time spent with the Battlefleet he was impressed with the iron discipline of the men on the Imperial Destroyer he was posted, Praefectus Uglino Zeno. It was during this time in his life that during a boarding action from pirates his skull was crushed. It lead to him receiving from the local Tech-Magos a Cortex Implant.

Through this event he became more and more regimented in his daily life. This carried over this discipline to his job as a Navigator, to his family, all of mankind, and the Holy Throne of Terra. A spin off of this discipline and organization of his was life was his increasing distance to others he did not consider ‘disciplined’ or ‘devout’ enough. He believes in attempting to guiding those with a strong hand if necessary to ensure the survival of the majority through the treacherousness of the warp and real space. His personal wealth (gained through his House) he believes to be a sign from the God-Emperor that he is blessed, this idea also extended to all who have wealth. But if you God-Emperor wealth is misused he believes in utter destruction of those who engaged in such despicable behavior.

Being prideful also has the downside in that he looks down on those who do not venerate the God-Emperor. He is also not very happy when having to deal with those from the Chorda Rogue Trader Dynasty, due to previous unfortunate history between his house and hers. 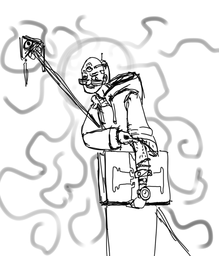