A Psylakis Warder is meant to be both bodyguard and executioner to an Astropath, and so it was for Mathieu Riek. Bonded to Astropath Johan Verdan of Svard, he oversaw the Astropath Senioris as well as general security matters on board the Citadel of Psykers. Unfortunately the warding he received was not enough to keep out whatever force is affecting Svard, and both he and his men fell victim to it, turning on their charges.

Initially deceiving Astropath Eckhart and the Death Bastards when they arrived to secure the Citadel, the corruption of him and his men was discovered before he could complete his task, and the Warder was captured by Astropath Eckhart. While interrogating the prisoner, the Astropath was repulsed by an intelligence and will far greater than any one man should possess, before the Warder dropped into unconsciousness.

On board the In Purgatio Lumen he was thoroughly examined both psychically and mentally. The latter revealed no unusual traces, apart from a gap in his memory that was expected. It did however reveal that the bond he shared with Astropath Verdan appeared to have been shattered somehow, though his warding remained intact. Physically he showed no damage, but when they scanned harder they detected a micro abrasion as if something had burned out inside of his brain.

Unwilling to believe that he was free of influence, he has requested to be moved to the brig of the Lumen once his injuries are sufficiently healed. 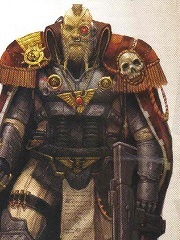