A Mechanicus Magos who conducts his own research in secret

The Adeptus Mechanicus attracts a certain type of person for its planetary-based research facilities, and Magos Hadron Shard of Damaris exemplifies that trait. Ensconced in his island Shrine just outside of the main capital city, he and his lay-priests are responsible for maintaining the holy technology of the system, in exchange for near total anonymity for his research. Few know what he works on inside of his shrine, but the presence of his elite Skitarii guards are known among the higher echelons of the nobility.

Explorator Artifex Felicis managed to ingratiate himself with the reclusive magos, and learned that he is extremely interested in enhancing the Mechanicus practice of distributed cognition. Magos Shard appeared very interested in interacting with the servitor crew of the In Obscurum Veritas, and has forwarded a copy of his research material for Felicis’s review.

So it was that I was bringing the holy relic of Saint Drusus to our Explorator Artifex Felicis. Although I am not privy to the workings of the Mechnicus I could sense that something was not right with this Magos. His lack of respect towards myself I could overlook, however he omitted the importance of Saint Drusus, and he was more interesting in the casket containing the relic and recommended its removal, which I refused.

He began his work onto fully revealing the casket. At that we taken over by the magnificent wave of blue all over the ship. At this point I was knocked unconscious briefly. I was awoken by Explorator Felicis. It appeared that my initial suspicion was correct. The power of the Saint had awakened in Magos Shard his true heretical tendencies. In his frenzied state he attacked myself and Felicis. While I dispatched the Magos heretical Skitarii guards with the baleful power of my eye, Felicis placed 3 plasma shots into the Magos chest. He walked over and passed judgement on the Heretic and destroyed him.

With all this excitement Explator Felicis decided that it would be best if the relic was returned to the Lumen. And so it was that we can see that the relics and true power of the faithful Saints, can see and hunt out heretics even in there death! Truly a miracle, none can escape the wraith of Saint Drusus even in his martyrdom. 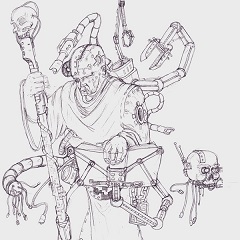