An Explorator who leads the Mechanicus fleets in the Expanse

The senior Magos of the Adeptus Mechanicus in charge of Altar-Templum-Calixis-Ext-17. He oversees all of the Explorator fleets that prowl the Koronus Expanse in search of lost Archeotech, as well as any Xenotech or items of interests that can be reverse engineered to gleam more of the Omnissiah’s truth. His views would be considered Radical in Imperial space, but his knowledge is undeniable and the Mechanicus likely preferred to send him where he could continue his inquiries and knowledge unfettered rather than face discipline for espousing his beliefs.

Explorator Felicis met with the Magos aboard the Mechanicus Station to trade the co-ordinates to the Promise of Agony in exchange for a reward from the Priest of Mars. Though Felicis did manage to briefly surprise and re-activate the Magos’ “civility algorithms”, he nonetheless simply and matter-of-factly continued in his desire to learn the location of the Dark Eldar Cruiser. Explorator Felicis relented, and the Magos promised a reward commensurate to that which was given before leaving to make preparations for salvage. 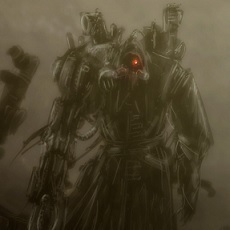