An alluring Rogue Trader, her family had a small but lucrative market in the Agrianna Subsector of the Scarus Sector. Known for their shrewd business dealings and exemplary conduct among the Ministorum, they were the kind of Rogue Trader family that got along well with official branches of the Imperium, if being viewed as stuck in their ways to the rest of the Galaxy at large. In late 790.M41, an Orkish WAAAAAGH came to Agrianna, and the Battlefleet Scarus was out of position to fight them off. Although few of their interests were directly affected, the Charabelle Dynasty committed the full resources of their Dynasty to fight off the invaders.

Although successful, the Battlefleet did not support the Charabelles in their fight, and as a result the bulk of their forces were crippled or destroyed outright. With their fortunes devastated, the Fel Dynasty moved in to claim some of their beleaguered assets, and the fortunes of House Charabelle took a turn for the worst.

Attempting to shore up their losses, Madam Charabelle has come to the Koronus Expanse to find new business opportunities and once more strengthen the position of her House so that she can return and their line will once more serve the Imperium with pride. 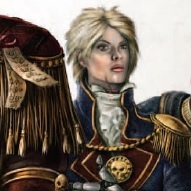