After the decimation of the Svard space defense fleet at the hands of the unknown xenos vessels plaguing their system, only one of the Svard Defense Force Frigates was left operational, headed by Captain Lindsay Garret. Though eager to reclaim the lost moons and domains of Svard, she was aware that the odds of one ship succeeding where the other eleven had failed was minimal, and that she might be all that stands between Svard and a full-scale invasion.

When the Hos Dynasty arrived in system, the supplies brought by the In Purgatio Lumen and the technical wizardry of Artifex Felicis allowed a damaged Frigate to be brought up to Operational status. As a result, Captain Garret was capable of transporting Zacharya Caine and his retinue to Exclusion to find what had happened to that lost world.

She offered concise but pertinent advice to the Arch-Militant regarding the political situation in Svard, and the situation was resolved to the satisfaction, albeit perhaps not the pleasure, of all parties involved. On the way back to Svard Prime, her vessel came under fired by the Xenos vessels that had ruined all of her comrades, but between her and Caine’s leadership they managed to successfully fight them off and return safely.

From the desk of JHos

For bravery and repeated success in battle, as well as the growing size of the System Defense Fleet, I have bestowed upon Lady Garret a Field Commendation. Hereafter she shall be referred to as Fleet Captain, as is the fashion when one is coordinating many vessels in times of war. 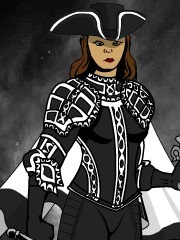