Arrogant Upstart who dreams of taking over the council of Svard

An outspoken and brash youth, he is newly elected to the council of Svard and clearly has aspirations of replacing Speaker Tal in the Crystal Council. His initial foray into meeting Jequin Hos did not go as planned when an assassin burst into the room, and subsequent meetings did not improve the situation. He left in what could be best described as a huff, and appears to now be solidifying his position during the crisis.

Kusinen was strongly opposed to the Hos Dynasty’s encroaching influence in the Svard system, and was leading a series of protests hoping to gain enough popular support to overthrow the Rogue Trader. His last protest coincided with the return of The Whisperer, leading to widespread chaos and panic in Svard Prime. He united his forces with the rest of the Crystal Council to defend the planet successfully. Following the incident he was formally censured, but allowed to keep his position as part of the general amnesty to hide the extent of the Xenos corruption in the system. 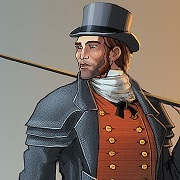