A Space Marine who had infiltrated the Deathwatch, and brainwashed them into believing they were members of the Dark Angels, transporting heretical members of their own Chapter back to their people. He apparently attempted to start a war between the Space Marines and the rest of the Imperium, but his schemes were foiled when a warp accident threw him into the body of the Seneschal Sarvus.

Sarvus’s body was slain by Jequin Hos, and his hold over the Deathwatch was broken. The body of Lamdus now is possessed by the Seneschal, confusing many involved. Fortunately the Alpha Legionnaire’s relatively short stature means that the Seneschal is now passed off as a very large and muscle-implanted human. 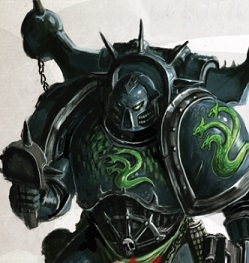