Boorish and Uncooth Captain of the Chains of Dusk. Can't hold his Warp Eel.

A relatively unknown quantity in the Expanse, his Warrant appears to have been newly come by, and he safeguards information about his past. He has never passed up an opportunity for profit, and adores any chance where he can taunt or demonstrate his superiority over others.

During dinner at the Liege’s Court, after failing to impress the crowd with his rapier wit, he was baited by a combination of efforts by Astropath Eckhart and Artifex Felicis into trying Deep Warp Eel in order to save face. This was less than successful for him, and resulted in an embarrassing rush to flee the Liege’s Court.

He threw his power in with Hadarak Fel, and was instrumental in delivering the captured Dynasty to the Dark Eldar, insisting that their suffering would alleviate the pain that the Dynasty had covered. Apparently he had slowly been mutating and corrupted following his embarassment, and was barely recognisable as human anymore.

Following their escape from the Nexus, he tracked them down when they retrieved the relics of Jollus Marquette. His ambush slew many civilians, but again he could not find his vengeance. In desperation, he gave in to the dark powers and mutated into some a Cephalopodic horror which overpowered Eckhart to his great delight. However in his arrogance, he failed to consider the threat posed by Jian Vang , and was defeated. 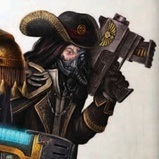