Port Wander Frontman for the Ventan Iron Hounds. Not the friendly sort.

Even among the Imperial Navy there is the need for mercenaries and press-gangs to fill the bowels of starships. The Ventan Iron Hounds are one of the many organisations to fill such a void, and their spokesperson in Port Wander is Captain Karsus Har. A burly, quick-to-anger man he keeps his finger on the pulse of information going in and out of the station.

Rumours abound of his ability to acquire anything: Power, Information or Vengeance if one is willing to pay the right price. In his eyes burn the anger of one who was abandoned, and he has little energy for those who waste his time, or would send any slight at him.

Unfortunately his paranoia was not all-consuming, and during an interrogation by the Explorers, Astropath Eckhart managed to extract the information about his more illicit operations on the Port without his knowledge. Now that this information has been turned over to Commander Sans, his safety and continued operations on Port Wander have been threatened like never before.

He recently appeared to return from the dead and blackmailed Artifex Felicis threatening to reveal his activities to the Inquisition. Given that the beings he was working with were revealed to be the Slaugth, it is not unreasonable to assume this is the secret to his “resurrection”.

Karus Har seem to be not one with which we should associate with. I applaud the Lord-Captain in his decision to turn material in for an investigation into Commander Sans.

In my brief interactions (and Astropath Eckhats assessment), he seems as though he is crafty and would use blackmail and would resort to any trickery to get what he wants. He is not to be trusted. His associates in the Ventan Hands would likely be similar. I recommend we stay clear of them at all times. The fallout from the possible arrest of Kar has yet to be seen. How his associates in the Ventan Iron Hands will act is not clear (nor the possibility if they will be implicated). In addition how his possible detention will affect his blackmailed contacts in the Battlefleet is not certain (my educated opinion is execution to those traitors).

Karus Har has died. It appeared that he has been flayed alive from the neck down. It would appear that any problems with Karus Har we had may have been solved by people from his own mercenary company, the Iron Hounds. It would also appear that members of the Iron Hounds have taken a dim view of our interactions with them. As to what plans for involving us are. I would not agree with Astropath Ekhart suggestion of extreme caution. One suggestion by him, the creation of an intelligence gathering group and section may be useful. In dealing with the Hands as a group my suggestion is we treat them with cold indifference. Hopefully the Hands with time realize what a positive thing we have done for them with revealing the traitor that is Karus Har. 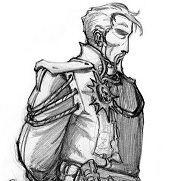