Former Drug Runner, she was devoured by the Xenos she Trafficked

Encountered by Zacharya Caine during his investigation of Castus Klein, this hard-bitten woman was revealed to be partaking in a highly illegal smuggling operation involving live xenos creatures aboard her vessel. When Cayne confronted her about it and demanded to be shown the inside of her ship, she led him to the holding facility where the creatures were kept, and promptly locked the Arch-Militant inside and freed a number of the creatures.

Unfortunately for her, she had not realised the augmetic capabilities of the Arch-Militant, who quickly escaped the trap and dispatched Roth’s guards. Subject to interrogation, she revealed that the drugs were manufactured from the Xenos inside, but when she balked at revealing any more information than that, Cayne quickly threw her to the Xenos he had just escaped from, where she was torn apart. 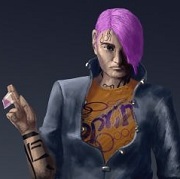