A Master Trader with massive shipping power over the Expanse

Jonquin Saul appears as a handsome, middle-aged man with a noble bearing and a roguish twinkle in his eye. He’s always ready with a hearty laugh and a lascivious wink for a young woman who catches his eye. However in trade negotiations he’s known to be relentless and an expert negotiator, although he always plays fair. Deeply spiritual, he has set his organisation up with the underpinnings of both piety and respect, and his crew are deeply loyal to him.

The self-proclaimed Trade Admiral of the Expanse, Jonquin Saul has built himself up as a serious influence in the Expanse not through military might or great missions of exploration, but simply by establishing solid, reliable supply lines bringing everything from corpse-starch for ship officers to the rejuvenat treatments craved by the extremely rich living in the Expanse.

He believes in discipline and respect, and that the best way to ensure loyalty of both those you work with and those you deal with is to be firm yet fair. Every lesson about responsibility is echoed in his bearing, and although his rise in the Expanse has been slow, he has never been known to suffer a misfortune in his dealings.

Running a shipping company based out of Footfall, he or a representative of his can usually be found there transporting goods that might be scoffed at by most Rogue Traders as mundane, but they usually come around when they absolutely need a supply of death world rebreathers for a sudden business venture.

His fleet is composed primarily of transport vessels, with a few frigates thrown in for sensitive transfers. If his business ventures are ever threatened, he prefers to rent military forces from fellow Rogue Traders rather than soak the unprofitable maintenance of a large military fleet that produces little in the way of capital. 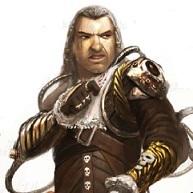