Recovered from the Dark Eldar. Mute yet wise beyond belief

This creature was located aboard the Promise of Agony. When encountered it was badly wounded, and surrounded by Dark Eldar that had apparently perished trying to reach the Recovery Chamber. Upon encountering Navigator Maturinus, it entered the chamber to recover its strength.

Since emerging it (like all of its kind) has not said a word, but appears indebted to the Explorers for rescuing it.

The Jokaero was involved in an unknown modification of the ship’s power system as determined by Artifex Felicis. Following his measurements and Captain Hos’s dedicated searching, the Jokaero lair was located. The strange Xenos was not inside however, and his task appeared left half-finished, a rarity with this breed of mysterious Xenos.

It was discovered that upon entry to the Svard system he had utilized the Magoros Shards to modify the Lumen’s augur array in such a way that it detects Yu’Vath technology. Following this upgrade, he has again vanished into the ship.

My encounter with this xenos occurred on what appeared to be some Eldar chemical manufactorium. It seemed to have killed many Eldar with the rings on its hands. As it didn’t engage us and Lord Hos orders were to investigate the life sign I though it better to leave it alone. It then dunked itself into what was later discovered to be an Eldar healing tank.

It refuses to speak, although it appears to understand us. How much we can trust it I do not know. But I remain skeptical as to its worth and remind Lord Hos not to turn his ship into a travelling xenos show, as that is where we seem to be heading. 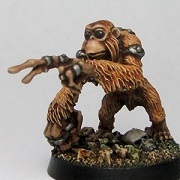