Jeremiah Blitz is a man who has always survived by his own wits, and a healthy dose of luck. Though a lot of his past is shrouded in rumour, what is known is how he gained his Warrant of Trade. An incredibly high stakes game of Chance in the Calixis Sector ended with him gaining the Casuat family Warrant of Trade, ownership of the Ordained Destiny and various holdings throughout the Calixis and neighbouring sectors. How he gained entry to this game and what stake he offered is one of the secrets of his past, but once he became a Rogue Trader he quickly dodged the sore losers from his past and came to the Koronus Expanse.

A known participant in the Cold Trade, his mighty cruiser along with its two support vessels frequently make raids into The Accursed Demesne to battle and salvage materials from the Orks present, whereupon he conducts his business primarily aboard his opulently furnished Cruiser which can break down the caution of even the most tightfisted miser.

The battles in the Damaris system we have seen the nature of Rogue Trader Blitz. He is a man who seems to put profit first and for most. As well he seems adverse to taking risks, although when he plays the ‘game’ he seems to not take it personally. This is suggested due to his reaction to Hos being installed governor of Damaris.

It should also be noted that he likes to spin tall tails, but not only that he enjoyed the partying after the battles over Damaris. This is certainly something Hos and Blitz have in common and could be exploited to further relations. 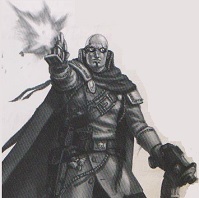