Former Captain of The Emperor's Bounty, though not former enough

Janrak Spargan was a captain who had served the Battlefleet with distinction and pride during the Angevin Crusade. When his ship, the Emperor’s Bounty was lost in the Angevin Crusade he was merely sent to the region that would later be named the Koronus Expanse, where he apparently continued his Battlefleet duties bereft of the usual support. Despite a long and apparently profitable crusade, his vessel was eventually left unable to enter the warp with the death of his Navigator. Choosing to grant his crew the Emperor’s Mercy, he vented the atmosphere consigning them to death in one swift action.

He however survived, and over the millennia slowly succumbed to demonic influence, believing that everything on the Bounty was his. When the Explorers arrived to claim the vessel, they found the weakened, trapped, but still very dangerous captain on his throne. Reanimating the crew to do his bidding, he eventually lost his patience when Astropath Eckhart banished one to the Warp and engaged in single combat with Jequin Hos. Falling to the Rogue Trader’s blade, the captain exploded in a burst of Warp Energy, and finally was laid to rest. 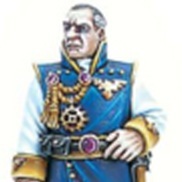