Would-be assassin with no memory of his reasons or actions

When the meeting between Jequin Hos and Speaker Hermiod Tal was interrupted by a brash, upstart noble, Captain Hos managed to expertly defuse the situation by insisting on a pause for drinks. However one of the servers was serving more than just the local cider, he was attempting to serve… death. One lone gunman was no match for the Rogue Trader and his Inner Circle, but upon regaining cnosciousness he had no memory of his actions or why he had taken them.

Jabez Caul, far from being an assassin, was a loyal servant of Svard for many years and a staunch supporter of the Hos Dynasty’s claim on the world. His actions and reasoning behind them are still shrouded in mystery, as is his inevitable fate. 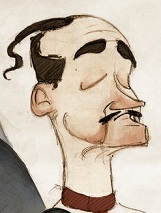