Persuasive Creature that nearly destroyed the group. Then it met Eckhart.

The Herald of Slaanesh was an ancient being apparently entombed aboard the The Widening Gyre. It slumbered there for an unknown period of time, but must have regained sentience shortly before the Explorers reached the Grace system. When the Gyre was boarded and reclaimed, he struck and caused many of the armsmen to turn on themselves causing a massacre. When most of the crew retreated, he personally led an attack on the Explorers, incapacitating Navigator Maturinus and nearly destroying the group outright. Only a mixture of clever tactics and the incredible will of Astropath Eckhart finally sent this hated creature back to the Warp where it is hoped he suffers greatly for his failure.

The demonic entity meet on the Widening Gyre is a terrible sight to behold. Woe to those who hear his unholy demonic prayers and chants. He will attempt to lure you into his fold through warp coercion. Do not believe his sickly sweet lies and promise for they will only lead one to corruption and damnation.

He is a powerful warp entity who will turn man against man through possession. His attempt to control my mind was a successes, truly the terrors and whispers of the warp he shared shall haunt me forever. It is recommended that if we meet him again to stay about 150 meters away from him. In addition ensure that your mind is properly guarded against his attempts to intrude. Otherwise you will become his play thing. If at all possible have psyker engage him in combat with a powerful psy-sword, while the rest distract him.

If you meet him do not talk to him. Pray to the Emperor and shoot him.

It appeared that he was on the Widening Gyre on the orders of Aspyce Chorda. How and why she or the Iron Hounds were transporting such dangerous cargo is unknown. It is very disturbing but I could believe Aspyce Chorda could do such a thing as transport demons (she is a very hard women). Although perhaps we can use this as leverage against her and the Iron Hounds at some point. I am sure the Inquisition would be very interested in this event. 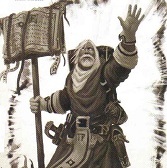