Blood for the Blood God. Skulls for the Skull Throne. Something like that anyway

Theorized to be the being hunting down Ember Nostromo, she was lured to the Svard system by the Navigatrix and forced the hand of the Dynasty to defeat her fleet in order to slay the beast once and for all.

Her invading fleet was crushed by the Dynasty, and she herself was slain in combat. Despite being able to nullify the abilities and defeat both Astropath Eckhart and Navigator Maturinus, she ultimately fell in combat to Zacharya Caine’s augmetic body. Apparently impressed with being defeated, the third Herald passed away. 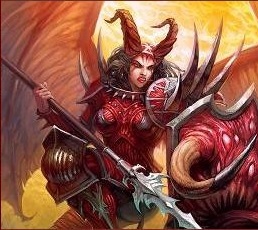