The Fel Dynasty and the Hos Dynasty have a history that dates back thousands of years, which has ranged from polite hatred to cordial disgust. Although never officially driven to open war, ever since the debacle 2,000 years ago where the Fel Dynasty failed to prove that the Hos had lost their warrant of trade, their family had been viewed as a joke and the Hos Dynasty kept that reputation alive, driving them to near ruin.

Hadarak Fel set out from the Scarus Sector several decades ago and has established a series of effective and influential trade routes, the first significant growth his Dynasty has experienced in a number of years. Unfortunately, a chance encounter with Jequin Hos may have rekindled that rivalry, especially as the Rogue Trader lost a profitable mining contract in an ill-advised wager.

During the Dynasty’s adventures in the Processional of the Damned, he rose to prominence fighting off the Orkish invaders from Winterscale’s Realm, and eventually accepted a position in the Rogue Trader’s senior staff. He appeared to Captain Hos to propose Winterscale buying out the Svardic assets of the Hos Dynasty. Confessing to Jequin Hos that he hoped the Rogue Trader would reject the offer and that war would come he was abruptly killed by the Eldar in order to guarantee a war.

At the day before the ceasefire between the Hos Dynasty and Calligos Winterscale was due to expire, a suspicion from Jian Vang was investigated to reveal that the body of Hadarak Fel appears to have been vat-grown and was not nearly as old as one would expect.

At the climax of the War, the agents of the Fel Dynasty engaged the Hos Dynasty and emerged triumphant. Fel revealed that he had forged an alliance with Krawkin Feckward, and the Logicians which culminated in the technology needed to accomplish his goals. He had created a genetic clone of Jequin Hos to usurp his Dynasty, while the Logicians somehow implanted his mind into the body of Calligos Winterscale, allowing him to usurp both Dynasties at once.

With the Hos Dynasty sold into Dark Eldar slavery, he now sits atop the Expanse, unknown to all concerned. For his new form refer to Calligos Winterfel 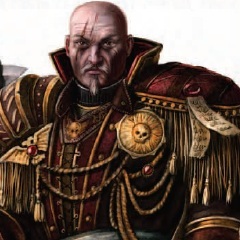